As emission reduction targets tighten, the debate on just transition is intensified. Significant financial instruments have also been established to support just transition.

In Finland, the debate on just transition has recently focused especially on the loss of jobs following the future phase out of peat production. However, the core meaning of the concept is broader: supporting people who lose out in the sustainability transformation and taking all citizens into consideration in a socially equitable way.

Just transition also provides auditors with a useful tool for mainstreaming the basic idea of the 2030 Agenda into audits of different areas.

In audit work, issues of justice have traditionally been considered in performance audits related to social policy. However, sustainable development challenges us to consider these issues in all policy areas.

In addition to the 17 Sustainable Development Goals (SDGs), the 2030 Agenda, approved by the UN in 2015, also introduced the principle of “Leave No One Behind”, which nicely summarizes the issue of justice. At the Office of the Auditor General of Canada, for example, the UN SDGs are considered in connection with all performance audits. Often this also leads to assessing justice aspects.

The National Audit Office of Finland is also developing and testing procedures to take justice issues and other key aspects of sustainable development into account in audits.

Just transition also involves a significant financial instrument during the next EU programming period. The new Just Transition Fund provides nearly EUR 20 billion for supporting areas where the transition to climate neutrality poses serious socio-economic challenges. Finland is planning to use these funds to support peat producers. In addition to being closely linked with the energy transition, just transition is also linked with food policy or transport policy.

The concept was created by the US trade unions

Just transition has its roots in the United States of the 1970s. Trade unions developed the concept in a situation where the tightening of environmental standards was taking jobs away from polluting industries. Today, just transition is typically linked with industries that have a key role in achieving climate objectives, such as energy production. Coal phase-out, for example, is a sensitive issue in many European countries.

From the perspective of the philosophy of science, just transition is linked with critical theory and basically means siding with the weak. The key question is how the transition to a coal-free and environmentally sustainable society affects social justice and how people, and especially the most vulnerable, are supported in this change.

In Finland, the debate has largely focused on peat, as the Government decided to extend the deadline for the use of peat by granting tax aid. If the Government had solved the peat question in line with the original idea of the concept of just transitions, it would have paid compensation for the closing down of production, supported entrepreneurs in their reorientation towards a new industry, and considered the impacts of the phasing out of peat production on other people through increased attractiveness of the local environment, for example.

Just procedures, a dimension of social justice, means that other actors than peat producers are also consulted on the matter. It is therefore be essential to consider just transition sufficiently broadly. It is important to consider what industries should now offset the emissions reduction obligations of peat production, how the continued production affects not only the climate but also, for example, water quality, or what kind of message it sends to young people about our ability to solve the climate issue, which will have a radical impact on their future.

Justice in the energy sector is linked not only to fossil fuel issues but also to the concept of energy democracy, which has emerged from civil activism.

Energy democracy means that citizens can take actively part in energy policy making and energy production. Energy justice is a sister concept to energy democracy and refers to the equitable distribution of the costs and benefits of energy services and to more representative and participatory decision-making.

Problems in achieving energy justice arise, for example, from the fact that Western energy production relies partly on human-rights-trampling mining activities carried out elsewhere, that energy poverty is not actively identified in Finland, and that differences in people’s wealth and their geographical location and in the ownership of their home affect their possibility of owning their own energy production, such as solar panels. People’s capacity to act as part of the energy transition also depends on their skills and know-how.

The debate on food justice, too, has long addressed concerns about the uneven distribution of revenue and competence between, for example, producers and retailers, or between the global north and south.

Climate change also brings new, very concrete justice issues to policy preparation and making. In Finland, for example, more than half of the greenhouse gas emissions from agriculture are generated by the cultivation of peat soils. Most peat fields are located in Northern Finland and Ostrobothnia, which puts regional justice at the centre when policy measures are planned.

An equitable agricultural policy takes regional differences into account and offers diverse and ambitious means for reducing emissions from peat fields, taking the needs of different kinds of farms into consideration.

In any case, measures taken at the production end alone are not sufficient to respond to climate change. However, different individuals and socio-economic groups have different opportunities, capacity, and abilities to change their eating habits or reduce their meat consumption.

The Finnish school meal system is a good example of a social policy that supports wellbeing and justice. Similar policy measures to compensate for social differences should also be further developed as part of the implementation of climate policy.

One way of addressing just transition is to examine it at different scales. The research of Sovacool et al. utilized macro, meso and micro scales for analysing injustices.

To give another example, at the micro scale, the French nuclear-based power system involves health and business risks to those living near power plants, while at the meso scale, it involves the risk of accidents, and at the macro scale, for example, risks associated with uranium mining in other parts of the world.

Nevertheless, very little consideration is given in practice to global questions related to justice or cascading effects. In the EU, too, it is typical to consider how the activities of non-European countries affect Europe rather than the other way around. The memo by the Finnish Climate Change Panel highlights the importance of taking also the intergenerational aspect into consideration. Although a lot of research has been carried out on this subject recently, the way of thinking is not yet reflected in the practical policy preparation.

By taking just transition into account already when decisions are being prepared, it is possible to prevent injustices in the long term. Just transition originated from the trade union movement, but a genuinely just transition requires a large number of new and bold initiatives, both in the development of inclusion and policy measures and in audit work.

The text is based on the development of sustainable development approaches in the NAOF’s audit work. Research professors Minna Kaljonen and Paula Kivimaa from the Finnish Environment Institute introduced us to the subject based on background reading. 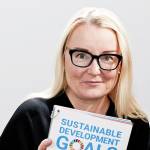 How to analyse overlaps and fragmentation in public administration?

The issue of silos, overlaps and policy coherence between administrative branches has been discussed for many years but the problem is how to tackle them. The FOD analysis developed by the United States Government Accountability Office (U.S. GAO) provides auditors and evaluation researchers with a new method. Audits carried out on the basis of the FOD analysis may help central government actors and policy makers to identify and solve these challenges.