In the National Audit Office’s view, the Government Financial Con-troller’s function is only playing a minor role in the overall development of internal control in central government.

The fourth aim of the audit was to ascertain whether the internal control of the customer service processes in the Finnish Government Shared Services Centre for Finance and HR is properly organised. In the National Audit Office’s view, the controls applied in the accounting offices and the Shared Services Centre are, from the overall central government perspective, often overlapping while at the same there are also clear inadequacies in the control procedures. The chains of tasks of financial and personnel administration have evolved from processes specific to accounting offices into cross-agency operating processes. When the chains of tasks become longer, there is a growing risk that the agency’s management is not adequately aware of its responsibility for internal control and risk management. Not all controls have been implemented or their introduction has not been properly supervised. The responsibilities of the centralised information systems used in customer service processes and the supervisory functions applied to them should be clarified. The functions of the Shared Services Centre’s financial administration processes and their internal control are extensively automated. The auditors’ view is that the internal control is, in essential parts, properly organised. More attention should be paid to ensuring the reliability of the controls. Material inadequacies were discovered in the internal control of the personnel administration processes. The development of the internal control procedures for the personnel administration section of the Kieku information system and the drafting of guidelines for them only started during 2016 even though the first accounting offices already introduced Kieku in 2011.

Recommendations of the National Audit Office: 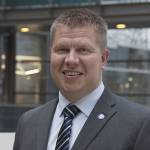