The future is not a self-fulfilling prophecy but a trend that we can influence. Tiina Väänänen and Ines Gullichsen, two of NAOF's young professionals, report on SuomiAreena, the public debate forum held in Pori. NAOF launched its young professionals’ programme in May 2018. The programme offers professionals at the start of their careers a broad perspective of the agency's work, while at the same time, it provides NAOF with fresh insights and new ideas. This is the first of the blogs that the young professionals will publish at VTV.fi during the programme.

On a leave of absence until December 31, 2021 tiina.vaananen@vtv.fi 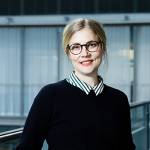 On a leave of absence until December 31, 2020 ines.gullichsen@vtv.fi

SuomiAreena, the hottest political discussion forum of the year was held in Pori between 16 and 20 July for the 13th time. The audience was again offered interesting debates on a broad range of issues and this year all this took place in an exceptionally sunny setting. The main themes were security, responsibility and tolerance, which were debated by experts and hundreds of other participants.

Both at SuomiAreena and in many other public forums, we have heard that we are amid a state of transition in nearly every sphere of human life. The fact that artificial intelligence is becoming part of everyday life, the EU and Finland as a member of the organisation, regionalisation, as well as such megatrends as climate change are part of our daily life, and they impact us as citizens and public authorities.

In Pori, there was debate on Finland as a country affected by these changes but also as an active European and global player in these issues. The participants highlighted the impacts of change forces on decision-making and daily life in Finland and

it was also emphasised that Finland is a systematically built welfare state characterised by strong regional identities and Nordic values. As an EU Member State, we are part of a political block extending beyond the Nordic area, which provides a framework for economic and political decision-making. As part of the global community, our task is also to react to megatrends by assuming responsibility for such issues as the slowing down of climate change and the refugee situation.

Many of the panellists repeated the same message: the future is not a self-fulfilling prophecy but a trend that we can influence. Megatrends and the threats arising from them are real but they can also be tackled.

The future perspective can be incorporated into audit activities

Was there anything in this year’s SuomiAreena that was of relevance to NAOF? Central government should also have a proactive attitude towards the future. Future challenges and current megatrends already provide a broad range of topics for audits, which means that NAOF, too, has a real chance to play a role when we are preparing for the future.

The future perspective could be part of the entire audit life cycle, from the audit planning stage to follow-up. By selecting entities for audit that are relevant to megatrends, NAOF, too, is well-placed to influence trends in Finnish society by issuing opinions and by taking place in cooperation aimed at a proactive approach to future. Producing correctly timed, material and high-quality audit information is becoming an increasingly important service as decision-makers are preparing for the future.

SuomiAreena was a brilliantly organised event with a broad range of different offerings. Expert panels provided fresh perspectives on issues and political arguments also made the week slightly entertaining. Some of the audience members had trouble coping with the summer heat and the intensity of the debates but these young public officials did manage to attend a fair number of panel discussions where participants included such notables as Pete Parkkonen and Tarja Halonen.